Last week was our first week back at school after break. I was really tired but very excited to start our new unit on the brain. On Monday we did some fun activities. We dropped a dollar bill from up high and tried to catch it as it swayed back and forth. The brain tries to guess where the bill is going to fall and then sends your hands out to try and catch it. The dollar bill is unpredictable in the beginning but your brain slowly learns the pattern of its fall. It becomes easier everytime you do it.

We also played around with dominos that were taped to a ruler. Only one side of each domino was attached to the ruler, so when we knocked them down they would only fall down one direction. When we took out one of the dominos in the middle, they would only fall halfway across the ruler. This represented parilization of the lower half of your body. If the spinal cord is broken then the brain’s movement signals don’t travel all the way through your body.

How do you break your spinal cord?

How long will this unit last?

How much will I learn?

Last week was really fun. We went on a long walk and checked out the new obstacle course that is being built. Some of my classmates presented their disease projects. We were supposed to write a five paragraph paper about a disease and make a poster or model. I studied Urinary Tract Infections (UTI). I made a poster that I’m really proud of, but I haven’t presented it yet. UTI is where your urinary system gets infected, usually because of bacteria that enters through the urethra. It can cause kidney failure, fever, abdominal pain, off colored urine, burning sensation when you pee, etc.. 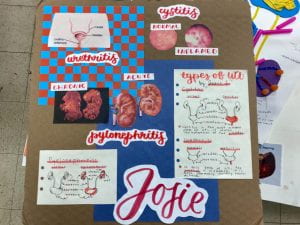 This is my poster ^

How common is UTI?

What will I enjoy most about studying the brain? 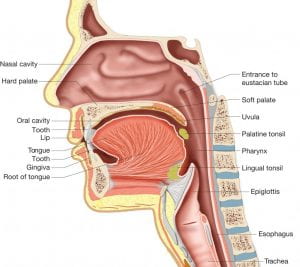 Here’s what I’ve learned so far: the mouth uses both mechanical and chemical digestion to break down your food. You chew to make your food smaller and easier to digest (mechanical digestion) and your salivary glands make saliva that is full of enzymes which break down sugars, starches, and fats (chemical digestion). The esophagus’s muscles go into peristalsis and move the food lumps into your stomach. That is what I have so far in my postcards!

What would it be like to travel through the digestive system?

What animal has the most teeth?

Last week in science class we worked on our chairs. We are building chairs out of two pieces of plywood. One piece fits into the other and each piece faces opposite directions so it makes a strange chair. On Monday I worked on finishing my Interesting Insects project. On Wednesday I worked on my Insect project and marked out the cuts I needed to make on the plywood. On Thursday I cut and screwed my boards. On Friday I painted the base color on my

I learned how to use a jigsaw, but it was really loud. I learned that the paint I was using was oil-based and didn’t come off my hands easily. I learned that giraffe weevils fight with their long necks. I’m very excited to finish painting my chair, because I’m doing something with some my friends.

Why are giraffe weevils black and red?

Why are we building chairs?

What is the science behind how the chairs work? 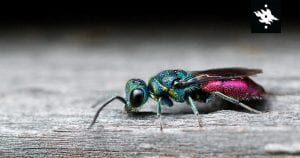 Bonjour! I’m Craig! I am a Cuckoo Wasp and I live in Europe and Western Asia. My species lays eggs in the nests of host species like bees and wasps and our young eat the eggs and/or larvae of the host. We can roll into shiny balls and stick out our stingers to protect ourselves. We are about a half inch long. I hope to see you soon! 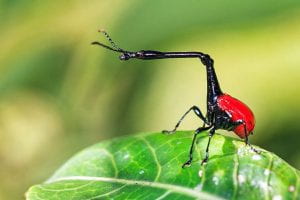 Hello! I’m Mylz, a giraffe weevil. I live in Madagascar only. Us males have necks that are 2-3 times the length of the females. We have extra long necks so we can fight other males and secure our place with a female. After we mate, the female lays one single egg on the end of a leaf and then uses her strong legs to roll the entire leaf up! After she rolls the leaf up she cuts it off of the plant and it drops to the forest floor. We can also fly! Our wings are hidden under our elytrons (our wing cases). See ya later!

Hey peeps, I’m a Gray’s leaf insect and my name is Gray. I spend most of my days just chillin’ on branches. I’m camouflaged to look just like a leaf, so it’s really hard to spot me. Shout out to evolution for making me look so leaf-like! My cousins and I are so well camouflaged that my cousin Lenny got put in a leaf collection book (we don’t talk about him much anymore)! My predators are birds, amphibians, and reptiles. I, unlike my predators, do not eat living creatures. Oh yeah, I’m Vegetarian (herbivore)! I live in the tropical rain forests of Southeast Asia and Indo-Malaya. So if you ever go there be sure to try and look for me!

This week we learned about light pollution. Light pollution is a problem affecting the world. Light pollution is the problem of having lights that make the sky glow and keep animals up at night. The lights from street lamps, buildings, homes, and more make the night sky bright. It can effect animals, who have specific day and night cycles and migratory cycles. For example: sea turtles can get confused when they try to lay their eggs on beaches and can end up on the road. The sea turtle hatchlings can also end up going the wrong direction because they are used to following the light of the moon.

Birds (who have migratory cycles during the night) are used to following the stars to migrate can get disoriented and thrown off course because of city lights. The light show tribute to 9/11 disoriented flocks of birds for years killing many. In 2010, though, volunteers watched the light show and shut off the lights if there were over 1,000 birds or if one was found dead. This solved the problem and from 2010-2018 only 2 birds were found dead by cause of the light show. Light pollution also effects humans. It can throw us off our circadian rhythms.

What can I do to help solve light pollution?

How long has this really been a problem?

What are the main species of birds effected?